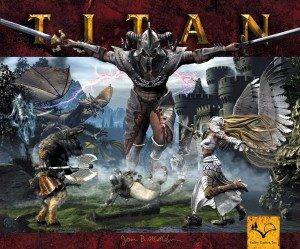 Titan is back! And it has brought along a few hundred of its friends!

Titan is a full-out monster slug-a-thon, in which players must be prepared to sacrifice their creatures to cause maximum damage to their opponents. Players take the role of the Titan, and roam the board attempting to recruit bigger and badder monsters to fight for their legions. But just as your own army grows, your opponents themselves will be seeking the clash of battle, and there can be only one true Titan!

Titan is played on a main gameboard, where armies are recruited, and positions set. When two armies meet, the action transfers to a battleboard, where the opposing forces battle for position and power. Only the strongest monsters will survive, bringing both points and glory to their Titan.

Kurt Miller and Mike Doyle combine their artistic talents for this reprint. Titan takes from 2 to 4 hours to play, and is for 2 to 6 players.